The First Lady of Rwanda, Her Excellency Mrs. Jeannette Kagame personifies an active, relentless and passionate devotion to uplifting the lives of vulnerable populations in Rwanda; particularly those of widows, orphans of the genocide and impoverished families. As the nation’s First Lady, she has admirably balanced family, social life and philanthropy, not only in her own country but continentally and worldwide.
She became a founding member of the Organization of African First Ladies against HIV/AIDS (OAFLA) in 2002 and served as its President from 2004 – 2006. In 2001, she founded PACFA (Protection and Care of Families against HIV/AIDS), an initiative primarily focused on providing a holistic approach to HIV prevention and care for the whole family.
Over the years PACFA grew to embrace more programs and in 2007 it changed its name to Imbuto Foundation. As Chairperson of Imbuto Foundation, she oversees several initiatives under education, youth empowerment, HIV/AIDS, malaria and economic empowerment.
In 2007, she was appointed by the World Health Organization (WHO) as the High Representative of the Africa AIDS Vaccine Program (AAVP) to ensure the active participation of African stakeholders in all areas of HIV and AIDS research and development. In 2008, the First Lady was named Patron of the White Ribbon Alliance – Rwanda Chapter, an initiative dedicated to ending maternal and infant mortality. In 2010, the World Food Program (WFP) appointed her Special Representative on Child Nutrition. In 2013 she was elected Vice President of the Organization of African First Ladies against HIV/AIDS (OAFLA).
HE Mrs. Kagame holds a degree in Business and Management Science and has delivered keynote speeches at national and international fora on various themes: including leadership, economics, health, children’s welfare and women’s empowerment, among others. 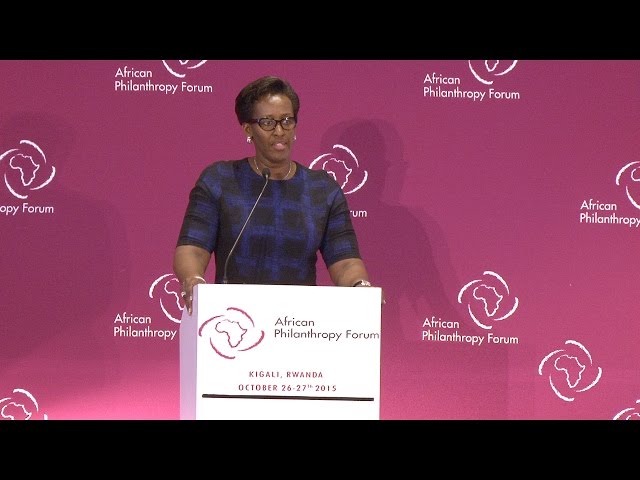